Results: A total of 147 patients were referred for mitral valve repair, of which 114 patients were accepted for mitral valve repair by the local heart team. In total, 106 of the 114 patients underwent surgical intervention, 6 defaulted their surgical dates, and 2 refused surgery. Of those accepted for surgery, 57.9% were males, 42.1% were females, with a mean age of 47.7 years in both groups combined, 44.7% had hypertension, 43.9% were smokers and 21.1% had concomitant IHD; 56.1% were pre-operative NYHA functional class III, 29.8% were class II, 7% class IV, and 7% were class I; 60.2% had a 6-month post-operative NYHA functional class I, 32.3% had class II, 5.4% class III, and 2.2% had class IV. Mitral valve prolapse (MVP) with flail segment due to chord rupture was the predominant etiology (29%); P2 was the most common segment involved (36%), followed by A2 (29.8%). For MVP, including patients with infective endocarditis, the mortality rate was 4.8% at 30 days and 6 months. The overall mortality rates for all patients accepted for mitral valve repair were 4.7% and 6.6% at 30 days and 6 months respectively. Freedom from reoperation was 98% at 6 months. There was a significant association between bileaflet involvement and mitral valve repair failure (p=0.006). Chordal insertion with annuloplasty was the most common intervention used (45.5%). 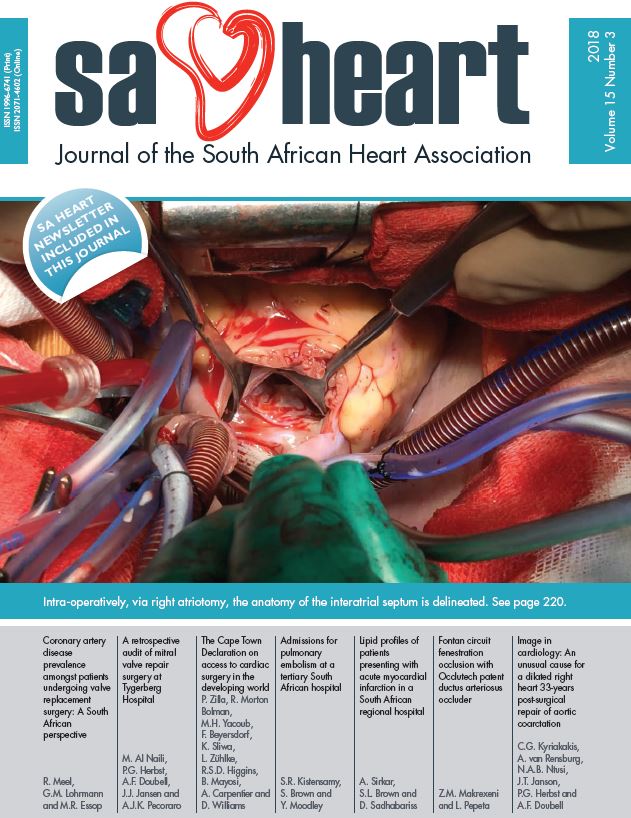 This journal is an open access journal, and the authorsÂ and journal should be properly acknowledged, when works are cited.

Authors may use the publishers version for teaching purposes, in books, theses, dissertations, conferences and conference papers.Â

A copy of the authors’ publishers version may also be hosted on the following websites:

Authors publishers version, affiliated with the Stellenbosch University will be automatically deposited in the University’s’ Institutional Repository SUNScholar.

Articles as a whole, may not be re-published with another journal.